November was a difficult month.  I returned to the hospital for my plasmapheresis treatment.  This plasma exchange is a procedure in which my plasma is removed, cleaned and replaced. My illness is myasthenia gravis  My own plasma contains antibodies that are making me sick. A port was surgically inserted, so that I could receive the treatment for several days in a row.

I was discharged from the hospital, feeling weak and discouraged. When I arrived home, I found Buddy, the snowman, standing upon the patio table.  This was his first visit of the season.  He had a big smile and his arms were wide open to welcome me home.  He was donning a brand new hat and scarf.  He had a walking stick for his journey. Everything about him caused me to feel gratitude and joy.  The weather warmed and Buddy left.  He is a traveling man, but I knew he would return.

In early December, Buddy returned. His hands were on his hips and he did a little dance.  He wore the most flamboyant hat!  I could watch him through the window while he told me about his traveling escapades.

Our weather has been mild this winter.  Buddy did not make it back until January.  He had his walking stick and he flashed that happy smile.  I noticed that he had eye brows this time.  He must have visited a spa. He collects new hats on his journeys and he is so excited to show them off to me. During January, I had been feeling extra sick.  My January visit from Buddy soothed me.

February, the month of love, arrived.  My husband, James, asked if I had looked out of the bedroom window. My surprise was another visit from Buddy. I was greeted by his loving snowman smile.  Buddy held a Valentine out to me.  He wore a beautiful new hat. I enjoy his fashion shows when he models his souvenir hats.

It is March.  Again, James asked if had looked out of the window.  Buddy has returned.  He has his walking stick and a cute new hat.  His facial expression is more serious than usual. Buddy and I know that when he leaves this time, he will probably stay away until next winter. He plans to be doing a lot of hat shopping and sight seeing.  We are wishing each other a great summer.  We will have lots of catching up to do next winter. 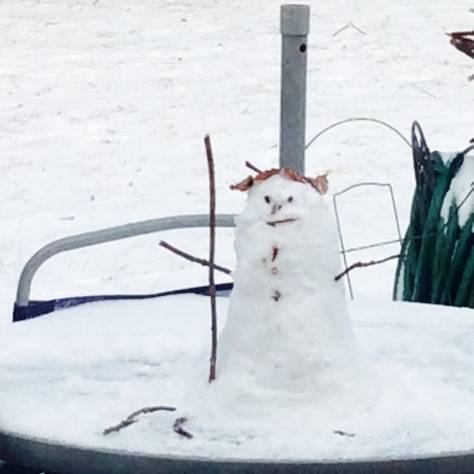 The story of Buddy is a love story.  It is the story of how loved I feel by my husband, James.  Not only  did he take the time to visit me in the hospital, he took the time to build me a snowman.  Not only has he taken over so many of the chores that I am not healthy enough to do, he has taken the time to build more snowmen.  All of the snowmen have stood on a table that I can easily see from the bedroom window.  On days when I couldn’t do much else, I could interact with Buddy.  Buddy and I love our James so much.